Have you found an online vendor selling Diplomatico Ambassador Selection?

Diplomatico Ambassador Selection is a limited edition rum crafted from 100% still pot rums and aged for a minimum of 12 years. Like its counterparts, the rum originates from Venezuela and is aged in ex-bourbon casks. The rum has a high strength and does not contain any sweeteners, caramel or other additives which means it does not require chill filtration.

A hint of aniseed and licorice. There is little by way of aged oak notes. No trace of any alcohol on the nose. 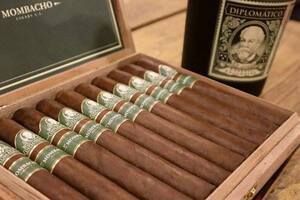 Published by Diplomatico 3 years ago via Cigar Afficianato