Have you found an online vendor selling Bundaberg ?

Tried this at a friend's house - he presumed it was a treat. He was very apologetic afterward and we then drank Windex to improve the taste in our mouths. Its like the management of the Bundaberg distillery made a bet to see what is the worst taste they could produce and then put it in a bottle to see whether anyone would buy it.

It's amazing that they even bothered ageing this. If you want to pay top dollar for absolute trash then this is a really good option.

This was a limited edition 8 yr old rum brought out in 2008 . I had the chance to try it at a friends wedding reception when the father in law announced that he had kept this " special rum " in storage until the big day ! He was as disappointed as the rest of us with the result !! This is just a slightly smoother , slightly stronger version of the ubiquitous Bundy UP.... Harsh , with that tart marmalade horrible taste. impossible to drink straight , just drown it in cola or ginger beer and take your medicine.. it can't of just been me as most of the bottle was left at the end of the evening , even the locals didn't fancy it.
This is a collectors rum not a drinker's rum.. 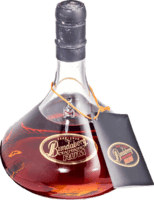