Have you found an online vendor selling Rhum JM VSOP?

Interesting but something just doesn't fit... 5 out of 10

Most of the agricole rums I've tried have been from Clement and I have liked them all to varying degrees. I even managed to snag a bottle of Rhum JM Gold which I liked rather well (rated it an "8").

So I had rather high expectations for the Rhum JM VSOP.

First thing is that apparently at some point they redesigned the label on the bottle. The bottle above used by RumRatings has an older label which has an old world charm to it with the artwork and hand lettering. Looking at it reminds me of the era of Henri de Toulouse-Lautrec and his poster art of the late 19th century. The current label all but eliminates that impression. The art on the earlier label had a more ornate and interesting portrayal of what I assume to be a distillery of some historic point. The lettering was made to look as if it were done by hand (and it very well could have been so). The colors had an artistic feel in of themselves.

The newer label lost all that charm in my opinion. The lettering is all mechanical (even the cursive). The artwork is much plainer. And the colors have no depth at all. It is less appealing.

Now off my art critic soapbox. Let's look at the rum itself. It is a deep amber color with a hint of bronze. It has nice legs and beads of the rum cling to the sides after settling from a swirl in my snifter. It has a recognizable agricole aroma but nothing harsh.

The flavor does have that grassiness and funk normally associated with agricole rums but this rums seems spicier. A definite pepperiness. And strong. Really strong. There is just a hint...and I mean minute hint of cane juice sweetness but this is a dry rum. Also it has a rather strong and lengthy burn. It is a slightly higher proof than most rums (43% ABV - 86 proof) but the burn is one I would expect from 95 proof or higher. The finish is dry as I would expect. However there is a flavor in the mix that I cannot quite identify. It is a flavor that I find odd and out-of-place. Sort of a kerosene type of flavor. I don't like it whatever it is. It's very pronounced on my palate drinking it straight however on the plus side it does seem to be lessened when used in Coke Zero. Just be careful not to overdo it on the rum. About an ounce-and-a-half for a 500ml (16.9 fl oz) bottle of Coke Zero seems to work best for me. I also think it would work well in citrus-based drinks. I haven't had the opportunity to try some. The downside is the price. At $50 USD a bottle (I've seen it as high as $60 USD online) it is a pricy rum. Frankly I don't think it's worth it. It's far too harsh to be a sipping rum and the strong flavoring limits it as a mixer.

I had higher expectations for this rum and was disappointed. I feel the Rhum JM Gold is much better as agricole rums go. There are comparable agricole rums that are less expensive and better than the Rhum JM VSOP.

I wouldn’t buy it again but it wasn’t the worst I’ve had. Somewhat personality free. Just tastes like alcohol, I’m having trouble being any mire descriptive than that.

fine traditional agricole 7 out of 10

Alot of history with this Rhum. Classic look to the bottle. The VSOP does not disappoint. A grassy cinnamon and clove flavor with a beautiful finish ..
Great for traditional tiki recipes or to sip if you like agricole.

A Constantly Shifting Experience 8 out of 10

What an interesting drink.

The nose of this rum just has a lot going on, and I feel like I get a different collection of smells every time I go for a sniff here. Butterscotch, solvent, vanilla, maybe a bit of cherry, some smoke, maybe cooked apricot or plum, touches of baking spice, it's complicated here. Maybe a bit too much alcohol on the nose, even after letting it breathe a bit.

Immediately on the palate I get toasty warmth, a bit of burn, but not an unpleasant amount, and a really mild, almost imperceptible toffee sweetness that runs right into, like, a banana ester flavor, which itself melts gradually into savory roasting herbs and spices. Toasted clove or allspice, maybe some cinnamon. Imagine a holiday roast. Really quite savory, almost becoming meaty, cut by that alcohol, all with a constant undercurrent of toasty, buttery, peppery, slightly grassy woody-ness. The finish is kind of short and subtle, but, surprisingly, quite fruity! I get almost a nectarine finish. Some kind of stone fruit, for sure.

It's quite dry, overall, and most of the little sweetness there is in the drink runs out pretty early on as its flavors develop.

There's a lot going on, throughout the whole thing. Ultimately, I don't know if its one of my favorite rums, but exploring it has been a really satisfying, and occupying, experience. I really want to rate this a '9,' but there's just something strange about that turn into those roasting spice flavors that doesn't feel as coherent as I'd like.

Smooth straight sipper 8 out of 10

Received this as a gift. Very smooth very nice would be happy to have it again

Always nice to have a rum from a unique destination like Martinique. Unfortunately harsh and sharp. Better than others, but unfortunately far from acceptable. Very whiskey like.

At 86 proof it comes on a bit hotter than you would expect. To me it tastes more like a whiskey than a rum. Enjoyable neat, and a couple drops of water don’t hurt.

Fantastic in Mixing drinks 8 out of 10

This has really rounded out my collection of rums. Without being overpowering, it has a distinctive flavor that shines through a drink. I've got to spend more time sipping it because it's subtle smokiness is different than any other rum I've got on my shelf. It's my top-shelf Mai Tai rum and goddamn a drink made with this is unforgettable.

edit: I find upon completing the bottle that it was agreeable performing centerstage in Ti Punch as well and I am likely to buy another bottle, albeit, may try a few rival brands of aged agricole before returning to this.

So this was an interesting and different experience as this was my first decent experience with a true Agricole rum (my experience with Barbancourt 8 Year was not pleasant). Going in armed with knowing a bit more about what to expect I found this rum to be interesting. It isn’t going to pull me away from Spanish and Bajan rums but it was a good experience. The nose is Lemons and light caramel and vanilla notes. It gives a sense of refreshment rather than warmth. The palate is oak, lemonade and some spice combination that is difficult to describe...maybe anise (?) . What I did find remarkable was the aftertaste because it wasn’t as much as an aftertaste as it was a lasting experience between the throat and nose which left a distinguished aroma or memory of fresh cut grass in the springtime. That was both unexpected and the best part of this rum. It is not as much a taste as it is an experience of the senses. Interesting. 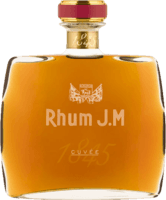