Have you found an online vendor selling Reimonenq ?

This Rhum named after Fernand Reimonenq and limited to 2180 bottles (maybe yearly) won a gold medal in Paris 2014, then five years old.
After that it has been bottled several times so it’s possible to find 7, 8 & 9yo at the market. On the 8yo I have seen that the botteling year is printed directly on the bottle, so I suppose mine in 7yo.
It’s unmistakable an Reimonenq, it has it all there. The complexity, the fruitiness, the spices and the hint of licorice is all there. It’s quite alike the “Grande Réserve” and the “Cuvée Prestige”, but much more sophisticated and smooth. You won’t get disappointed if you find it.
Picture: My opened bottle & My Reimonenq shelf.

Woody Rhum Agricole 5 out of 10

Visited the Reimonenq Distillery in Guadeloupe and bought a bottle of Rhum Vieux 2009 from the distillery since their tasting bar was very limited. Nice looking bottle and label design. Dark mahogany color. Typical Rhum Agricole flavors alongside grass, fruits, vanilla and plenty of oak followed by a strong burn being so dry. Rhum Agricole fans can easily add 2 points to my score. 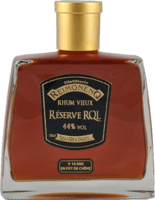 Easily access Rumratings while on the go by adding a shortcut to your home screen. All you have to do is click the icon and then Add to Home Screen