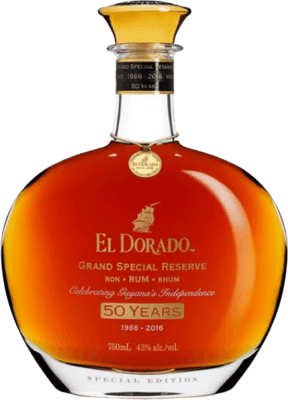 I finally managed to get a bottle! Posted 1 Mar '18 by Roy from Canada with 1 rating
10

El Dorado Grand Special Reserve commemorates the 50th anniversary of Guyana gaining independence from the United Kingdom in 1966. A blend of rums aged for between 33 and 50 years: 65% was distilled in 1966, 25% between 1966 and 1976, and 10% comes from 1983 and packaged in a crystal decanter and I received this bottle from my wife as a retirement gift and being the 90th. Bottle in my collection, I have yet to open this bottle to share my views. Being a huge fan of El Dorado rums, it would be a shame to give anything but a 10 pending a tasting of this bottle, but will revise accordingly at a later date.