Have you found an online vendor selling Appleton Estate Joy? 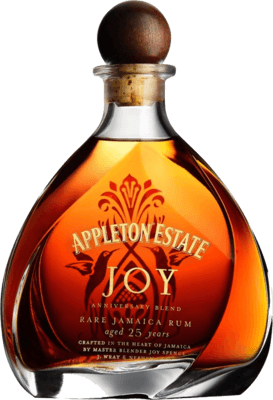 It’s much alike the 21-year old, but much smoother even though it’s 90 proof. Another difference is the taste of ginger and spices. Unfortunately it’s becoming harder and harder to find, so if you get the opportunity to buy one do so if you can afford it.
Picture: My top five shelf, My opened bottle & My Jamaican shelf.

I had this side by side with the Appleton 30 year. Both are exceptional Appleton rums. But to me this was even better than the 30 year.

Smells and tastes of oak, almond, butterscotch, nutmeg, orange peel, and vanilla. This has just a bit more almond and orange flavor and a bit less oak than the 30 year, which is why I think I like this a little more.

If you like the Appleton rums, I'm guessing you'll love this one. I'm not a huge fan of the Appleton style, as I find them a bit too dry for my liking, which is why I only rated this an 8. Still the best Appleton I've had, and if you're a fan of their style, I'm sure you'll love it!

I'll drink to that! 3
Report this review

Quite an expensive bottle of rum and thats a reason I didn't rate it any higher, its very nice but there are lots better for a fraction of the price.

This is labeled a twenty five year old rum, but is a blend with thirty and thirty five year old rums in it also, they labeled it twenty five as that's the youngest rum in it. This is the tastiest rum I've tried, it has great legs, taste and one of my favourite features, the slow smooth finish that tastes of honey. As I sip from my glass, I savour it with the thought that I wish I could afford to drink this delicious rum everyday!

I'll fill out this review more soon. I'll second Tom by saying this is the best rum I've tried. The first few sips are layered but gentle. What really stands out in my memory is the honey aftertaste. The aftertaste was like I'd just washed down a literal spoonful of honey. Absolutely incredible.

I bought one bottle when it first was available and just got a 2nd today as a birthday gift for myself. The packaging is very nice and the bottle is special and feels great in my hands.

Wonderful aroma, slight vanilla and citrus at first and a little oak. Very long legs in the glass.

Not sweet at all and not thick in the mouth. Just the perfect mouth feel.

The finish is pleasant with what I will say is a dunder component to it. I say dunder because that is how this was described to me when I tried the Mezan XO. That rum has overpowering dunder but is very mellow and pleasant. It actually lingers and keeps reminding me to try some more.

Posted 1 month ago by Brian from Australia with 27 ratings

I had the pleasure to taste a sample of this rum recently & was so impressed. So beautifully smooth. It’s a shame it’s almost impossible to buy now.

An excellent sipper 9 out of 10

I got exceptionally lucky and managed to pick two of these bottles up in a two for the price of one deal through Duty Free last year and to say it was money well spent would be an understatement.

I am just starting on my high end rum journey and Appleton's Estate Joy has possibly been the best I have ever had so far. Its very smooth, sweet and delicious on the nose but not too sweet that it overdoes it, very well balanced, has a delicious silky lingering aftertaste and if its left to breathe for a while (as any good sipper should get the chance) has little in the way of alcoholic whiff about it.

I've tried some nice premiums, like Diplomatico Ambassador, Ron Zacapa XO, El Dorado 21, Flor De Cana 25 and I have to say, on overall points balance, this would be the best.

A tad on the pricey side but the sort of thing you would want to break out on a really special occasion with good friends or that once in a year expensive treat to share on a sunset beach with a significant other.

I give this 9 out of 10 only because I don't feel I would be doing justice by giving it 10 without having increased my knowledge of fine rums a little more. Would absolutely recommend a try.

I first tried this in a bar in a great little bar called "The Brig" in Falmouth, Cornwall, UK.
It cost £30 for a shot, and was served with spring water, dark chocolate and something else which I can't remember. I remember beig quite staggered at how incredibly long the finish of this rum goes on for. (I walked a mile or two afterwards and was still tasting the linger notes of truffle and earthiness.
So, I decided to buy a bottle of my own. No small decision, given the price and availability of it. I eventually paid around £220 for one.
It has taken me almost a year to drink it (there's still a drop left)
I found that my bottle did not have the same taste experience as the one in The Brig. I never quite got the same earthy, truffley notes that I did the first time. Perhaps it is the amount of exposure to air which made the difference, I really don't know.

Anyway ... It has much the same basic characteristics of Appletons 12-year old rare blend, but feels a little more finely tuned, as you would expect.
The oakiness is there, but unlike the 12 y/o, it is balanced perfectly into the mix of vanilla, brown sugar and caramel. There is considerably less burn than the 12 y/o, so no ice cube needed to soothe the burn.

I think that one really special aspect of this rum is the way the flavours transition in your mouth. It's like one note begins to fade just as another builds and comes to the fore. It really is a taste journey.

So why only 8 out of 10? ... the price.
Maybe I'll get another one, but I have a lot of other rums to try and I could buy several of them for what a bottle of this costs. That said, if you have the means, it is definitely a rum you should try before you die.