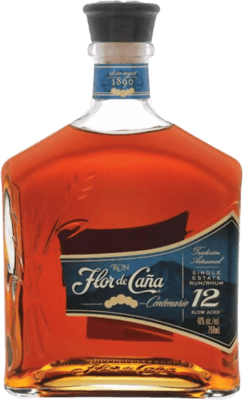 A sugar-free 12-year old, ultra premium rum that is sustainably produced (Carbon Neutral & Fair Trade certified). From a 5th generation family estate, it is naturally aged without artificial ingredients, distilled 100% with renewable energy and KOSHER certified. A full-bodied rum with a long and smooth finish that lingers in the palate. Best enjoyed in a Rum Old Fashioned or with a splash of premium sparkling water or ginger ale and an orange twist.

It's ok, and that is a little disappointing 6 out of 10

Posted 1 month ago by Harrie from Netherlands with 75 ratings

After tasting the FdC 7 I wanted to step up a little in their range. It has a nice score here (a 6.9 for a dry rum is pretty good on RumRatings) and it is rather affordable so I took my chances.

The nose is very recognizable when you know the FdC 7; at first pretty boozy, but that cools down in a few minutes, caramel, burnt sugar, baking spices, a little oak, orange peel, some cacao. All what you need to smell in a rum is present but the scent has also a bit of aggression in it, a little harshness.

On the palate it is a tad sweeter than expected but for the rest I pretty much get what my nose told me. A little pepper comes along and the oak is a bit more charred. Not very complex and a bit underwhelming after the FdC 7; I had hoped for more, not less, vibrancy and depht. It is better balanced than the FdC 7 for sure, and a lot smoother but also a tad boring.

Don't get me wrong; this is a well made fine rum but in all honesty it is not that special and it delivers not much more than my budget sippers or even, compared to some of those, less. After drinking the 7 and 12 I will probably rather try the 5 than the 18.

SO good, this stuff is. Rich and sweet with enough oak-spice warmly pushing through the flavor profile, most any discerning rum-drinker alive would be happy with this in his/her glass! Neat, on ice, or mixed with Coke or Sprite, this one's a winner on all fronts.

I'll drink to that! 9
Report this review

Mild aromas of caramel and vanilla and some oak but not sweet. While FC12 is not as complex as other premium rums I've tried, it is nevertheless a nice "go to" rum. FC12 sells for $38 CAD in my area and for that price, you can't go wrong.

UPDATE: The more I try FC12, the more I like it. In addition to the a/n comments, I find that the sweetness of this Rum from the Sugarcane really comes through after a 30 seconds or so, more so than most Rums I've tried. In spite of its affordability, this rum does pretty well as a sipper. I wish we could give 1/2 points in our rating sustem as in my opinion it deserves at least an 8.

Posted almost 5 years ago by Dr. Brittlebone from Sweden with 17 ratings

Nose: Starts with rum raisins, mahogany and whiffs of diesel fumes. A sharp cloud of alcohol numbs the nose. Then developments of marzipan and modeling clay followed by orange soaked honey and a huge load of nuts such as macadamias, hazel and Brazil nuts. The smell is still sharp even after ten minutes.

Mouth: This is new! De Cana has a very delicate sweetness to it which entwines around a heavenly creaminess in the middle register. Very exciting! Unfortunately this is almost lost in the immense alcohol cloud de Cana refuses to let go of. It is troubling to say the least and overshadows nearly everything. Here we have the most appealing rum possible (in a small doze) and it seems to be diluted by vodka. How sad! The nuts are still the main theme with the cream and fine sweetness as passive wingmen.

Reaction: I´m thinking older siblings in the Flor de Cana family could be interesting to meet with. The twelve year old feels young and uncertain but the pedigree is there and should be able to produce something more astute. This one feels adolescent, thin and a little cheap which it really isn´t. This version would never be my first choice among the many other tasty friends I have in my cabinet so when do I drink it?

Was expecting more from this. Find it a little harsh for it's age.

It's dry, which I like, and the heat dissipates quickly, which keeps it smooth. But, the flavor also disappears too soon, and it's not at all complex. Probably should get a 7.5 rating but I pushed it to 8 because it's a good, honest, no-frills rum.

This single state rum is one of my favorite from the Flor de Caña range, might be it is not than smoother as a 18 years but I like the balance.

The colour is amber and mahogany, the density and legs are good in the glass.

In the nose initially you can smell alcohol, with a water spoon opens and the sweetness become, sugar cane of course, the alcohol still present but you can start feeling this balance between the alcohol and the sugar/woody notes, beautiful to drink straight up or in a elegant coctel.

The taste is smoother than you can smell, burns just a bit when you keep it in your mount.

The medium body, and kinda long finish, you can feel the wood and bitter chocolate in your taste, some sweet notes as well.

I general for the price is more than recommended rum, cheers!

I like this rum and it's natural complexity. The flavor can at times have a lot of similarities with good bourbons. A little short of the finish in a way that makes me think it's not aged quite as long as stated, but it's still really smooth and complex nonetheless. Unique tobacco aromas and flavors are apparent and think it offers a great value at it's price point.

Less sweet than rums from the Carib - but price point and flavor profile make this just about my favourite sipping rum. More bang for the buck than almost anything.

To be honest I don't understand a good rating here.
A lot of effort needed to finish this bottle. Not much smell and taste, just alcohol.

For its age a big disappointment.

I'll drink to that! 3
Report this review

'smooth and full of fruit and nut flavors'

There is very little astringency or “booze” noted in the nose.

"A sip reveals a very smooth yet spicy rum. There is very little burn it tingles on the lips and tongue for a long time. It is a long finish."