Have you found an online vendor selling St. Nicholas Abbey ? 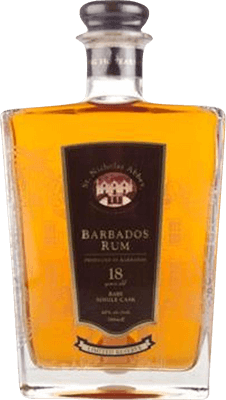 You can recognize the Barbadian soul and profile, but to me, it does something that no other rum does. It has some kind of x-factor that just sets it aside from every other rum. It might be an acquired taste, but once your there, it probably doesn't get any better... especially if your into pure, unsweetened bajan rum. It's amazing craftsmanship. The extraordinary 15 year little brother has evolved from a slightly frail and very delicate beauty into something slightly more refined, full and complex, without going overboard. This one just blows my mind every time I have a glass. As with the 15 year version, it's a little hard to describe the feel of this rum, but I'l give it a try.
Given time, the nose slowly greets you with a broad palette of notes. I pick up pineapple, banana, faint wooden lacquer, oak, sweet tobacco, hay and sugarcane juice. At the risk of sounding a little romantic, it's simply a beautiful symphony. These notes follow through in the mouth and is supplemented by oily leather, roasted hazelnuts and a slightly spicy tingling. The finish is very long with a buttery and nutty character. The balance is fantastic. I'm amazed by it's delicacy. It's expensive but absolute luxury and to me worth the price. If I could only choose one rum for the rest of my life, this one would probably be the first one coming to mind. It's no secret that it's originally a foursquare distillation, so let's hope to god that the very talented folks at st. Nicholas Abbey manage to recreate the miracle with there own new distillations. Fingers crossed.

First point, this is the best, smoothest rum I have tried coming out of Barbados. It is incredible! The aging and maturity gives it a huge edge over the 5 & 12 year old expressions. Not even close. Any harshness has been aged away and what’s left is a smooth sweet rum that can hardly be believed. So close to a ten that I may upgrade my rating, depending on my mood after 2-3 pours. I ordered and received my back up bottle and will plan for another as I can see myself over indulging on this heavenly elixir. Somehow this is sweet without being sugary. Please my fellow Rummies, get yourself a bottle and either back this review up, or tell me I’m full of shit. To date, this IS my favorite rum in the universe! ( After sampling some other expressions, I realize this is a true 10. Simply amazing.)

This is so different from the sweet heavy christmas cake rums I usually love. This is a relaxed, sitting watching the sun and waves and feeling the breeze. Leave it 20 minutes in a Norlan glass and then enjoy. What does it taste like? I wasn't paying attention. Whatever the other guys said.

In 3 months it's due to be renamed the 20 year old - already one barrel is and that's supplying the 20cl white/5/15/20 gift pack bottles. Note there is also now a new 5 year old cask strength and a overproof of the white rum both of which are excellent. And the barrels are running out for this 18/20 yr old.

Even the smallest drop on your tongue will bring pleasure. A smooth and very richly flavored rum with subtle hints and goes down your throat like if it was lubricated by wd40. Excellent.

I had the pleasure of visiting the St. Nicholas Abbey distillery, and tasted the 5-year and 12-year rums (both of which were great). After the tasting, I purchased an 18-year bottle and patiently waited until arriving home to taste it. I wasn't disappointed!

The flavor of the rum is so complex, and almost hard to pinpoint what flavors came at me first. It's not overly sweet, but starts off with a taste of pineapple, then a bit of raisin, then a deep wooden oak flavor. It's not the typical flavors that would pull me into a rum, but it seemed to really work here.


The Warren family are good people, and Simon led our rum-tasting event. He did a great job of explaining the rums, telling jokes, and entertaining those of us on the tour. We had a great time!

Nice aromatic nose with vanilla, flowers, citrus and spice. The mouth feel is soft and round, and holds a long time. It’s lighty sweet but in a gentle way, there is a little bitterness mid-way that lags a bit. Very good sipping rum.

I cannot say more than has already been posted here. This is without a doubt one of the finest distilled spirits in the world. I have sampled as many as I could over the past 44 years, this is my rum of choice (when available). I am not a fan of Barbados, so I will be looking for a way to St. Nicholas Abbey on the dark side.

Enjoyed a glass of St. Nicholas Abbey 18y while vacationing in Versailles. Okay bottle design, but could be much fancier taken into consideration how ridiculously expensive this rum really is. Color is deep amber. Very strong whisky flavors to both nose and palate. A hint of burn at the end. Add 2 points if you like your rum aged 18 years in a whisky barrel. Otherwise a score of 7 is more than generous for this whisky rum. Not my cup of tea.

It is from Barbados what is some kind of quality proof, but this one is different, slightly spicy and leathery. But amazingly smooth and surprising.

It's a very smooth rum, with additional smells and tastes of spice, pine, tobacco, leather, and a hint of oak, vanilla, brown sugar, and cinnamon.

I'm curious to find out if I'll like their younger rums better, as those should have less bourbon and more rum flavor.

Edit: I tried the St Nicholas 15 year, and I ever so slightly prefer this, as the 15 year also has a very heavy bourbon influence, but this is a little more sophisticated with the 3 extra years of aging.

Thank you, Santa Claus. Posted 18 Nov '16 by mistercoughy from United States with 239 ratings
8

Forget all that nonsense about the North Pole and the toy workshop. The REAL St. Nicholas is alive and well in Barbados...making rum. The 15-year-old offering from St. Nicholas Abbey is probably my favorite rum of all time, the one rum I would pack for the desert isle. I think it's the best of the Bajans,any brand, any vintage. This 18-year-old, on the other hand, is surely excellent but it cannot compare with its younger sibling, in my opinion. It has an amazing aroma, full of chocolate and toffee and sweet fruit. The tasting, however, is a little disappointing. It starts off well, with warm molasses and treacle, some butterscotch, and it finishes with oak and a little spice...and...well, sour olives. This rum really needs to sit in your glass for at least 20 minutes, more if you have the patience. The sharp aftertaste still doesn't disappear, but the full elegance of this rum shines through. It's still a bit thinner, less "chewy" than the 15yo, and so for me it's an excellent but not fully-realized experience. Is it worth paying twice as much for this rum as you would for Mount Gay 1703, arguably the gold standard of rums from Barbados? And is it worth 5 times the cost of MGXO? As the man says, Suum Cuique. For me, the extraordinary 15yo offering from St. Nick is priceless. If I could afford a cellar full of it, every day would be Christmas...