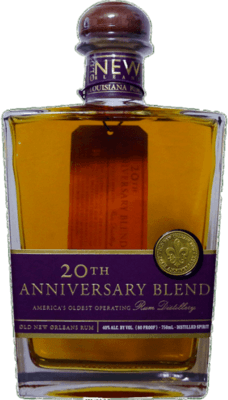 Smoked-rum is the note in this 20th Anniversary blend. 9 out of 10

Been searching for a bottle of this for a long time. 9 out of 10

Patience and persistence bring rewards. In this case a bottle of Old New Orleans' 20th Anniversary Blend rum dubbed "King Creole" (after the movie of the same name starring Elvis Presley) which was released in 2015. As a blend this rum comes from seven different vintages, some of which pre-date Hurricane Katrina originating from their St. Roch distillery which flooded after Katrina. Each bottle is indicated by hand the specific batch and bottle. Mine is batch 3, bottle 81. No one locally was able to order a bottle so I thought my only chance was when I next visited my sister-in-law Christmas/New Years who lives about 90 minutes east of New Orleans in Biloxi, Mississippi. However today I was rambling about town and decided to travel north 30 miles to Thomasville, Georgia which happens to have multiple nice liquor stores. One of which is Three Oaks Wine & Spirits. I went in and had to do a double-take when I saw the bottle on the shelf. I got the sole bottle and the man at the cashiers' counter said they ordered it because of me. A couple of months ago I had recommended Old New Orleans rums in general and told them how I couldn't get a bottle of the 20th Anniversary rum. I didn't expect them to actually order some. And I didn't expect them to actually remember me. However I am grateful they did both.

Anyway, enough of my sad tale.

This rum is a beautiful amber color and has a wonderful aroma in my snifter. Swirling it reveals excellent legs. Upon initial tasting I detect a natural sweetness and vanilla bean. It has a little oiliness which keeps the flavors on the tongue nicely. There is a slight spiciness to it along with subtle fruit undertones. The finish is slightly dry with very little tannin flavor even though the rum was aged in charred white oak casks. This rum has many layers of flavors, much of which I readily cannot identify but none of which are objectionable. Surprisingly there is no burn at all to this...just a gentle warming sensation in the back of the throat after swallowing. Overall a very smooth and tasty rum.

The rum is distilled using high-grade sugar cane syrup from a single source in Louisiana. The actually ages of the rums are not specific but it is revealed that some of the rums are pre-2001 which is when Hurricane Katrina hit the region and failed levees caused massive flooding in the city. According to online sources only 5,500 bottles of this rum were produced so I consider myself fortunate to have gotten one. Even though pricey (my bottle was $85 but I have seen some online prices over $100 for a single bottle) I find it worth every penny.

All in all, this is a superb sipping rum that deserves to be consumed as-is, or at most, with a single cube or sphere of ice. It would be a crying shame to use this as a mixer in a cocktail.

If you are able to obtain a bottle of this limited release rum I expect you to enjoy it.

This is ONO's flagship blend which they have dubbed "King Creole". Created from water, responsibly sourced molasses and very little else. I liked this rum but I thought it had too much influence from the bourbon barrels they age it in. I like their 3 year a bit better because it seems more unique to their method or near organic rum production the this rum. Definitely the best looking bottle of the bunch and hand filled and labeled because their bottling machines don't work well with the shape. If you want the artisan rum, this is the one they put their heart and soul into.

This rum is considerably different than their 10 year reserve. It's a lot sweeter, and I think I like it a little better, but it might be too sweet, or maybe I'm not a huge fan of their sweetener, which seems to be honey or honeysuckle.

Smells and tastes of sugar cane, honey suckle, bourbon, cinnamon, orange, caramel, and molasses. Decent, though the honey suckle may be a bit too dominant.

Certainly the best sipping rum for me. So smooth, no burn, sweet and just a hint smoky. Enjoy neat. I've only tried my Batch 3, but look forward to alleged subtleties between different batches. (Have yet to open Batch 4 and 5)

Posted 1 year ago by Blanex from Netherlands with 6 ratings

Best to drink once a time. Special pallet and mix of different tastes. Sometimes a little bit to sharp. Better with some ice.

Strong aromas of toffee and banana, smooth but quite sweet. Not bad at all.

It's smooth. It's got layers. I just didn't please me, no matter how I tried. Please see my review on the Crystal for more information.