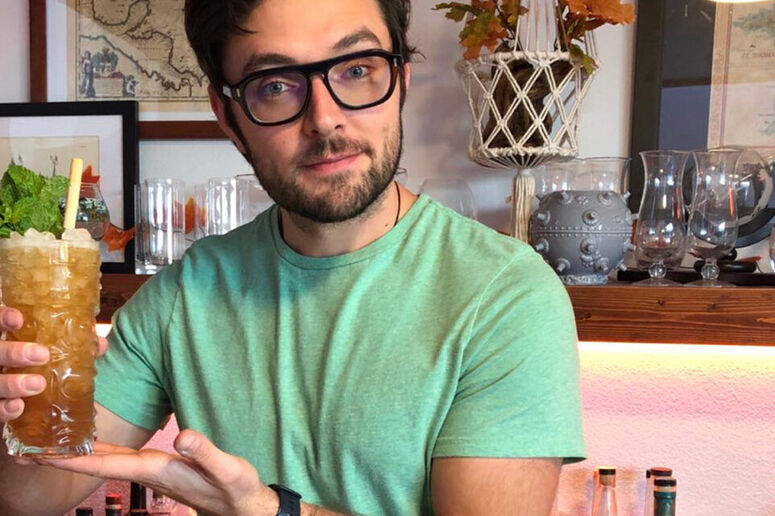 TRL: Who is Bryan Inman?

My name is Bryan, aka “The Rum Champion.” I am a rum-curious rum-enthusiast who has fallen in love with this amazing spirit. I chose the name “Rum Champion” from that scene in Game of Thrones when Prince Oberyn (RIP) tells Tyrion Lannister, “I will be your champion.”

To me, a “champion” is someone who represents a cause they believe in. To me, that’s working to bring awareness to the world’s most diverse yet underappreciated spirit, rum.

Rum is the end product of hundreds of years of tradition, history, and culture. It’s impossible not to be in awe of the craftsmanship that goes into rum production in 60+ countries, each with its own different styles and approaches to production.

Like many Americans, I thought of rum as Captain Morgan or Malibu Coconut until I stumbled upon a tiki bar in the middle of the Disneyland Hotel called “Trader Sam’s,” and that became my bar as I would take anyone and everyone there. I was blown away by the pageantry of it all, i.e. the music, the bar’s reaction when you order certain drinks, and of course, the drinks themselves. Looking at the menu, I noticed the base spirit in most of the cocktails was rum. That’s how it all started!

What the base distillate is, where it’s produced and how it’s distilled (i.e., is it molasses-based in column stills from Trinidad) The tasting experience (i.e. what I’m smelling and tasting with the rum) How rum interacts in cocktails (i.e. what happens when you combine rums from two different regions, like a dark Jamaican rum with a Rhum Agricole Vieux from Martinique?

I am a newcomer to the scene. However, I have made a few rum converts from several friends, which was the primary catalyst to start my Instagram page to reach a broader audience and spread the good news, so to speak.

An amazing home collection of 140+ bottles from 35 countries. This has led to:

–  My rapidly growing Instagram account, where I’ve connected with people all over the world who have shared their passion for rum with me. It’s been humbling to collaborate with a few people and learn from so many wonderful humans.

–  A huge appreciation for all the history and fun facts that are impossible not to geek out about and tell anyone that will listen to me!

TRL: What´s  another thing you are passionate about, in addition to rum? Why?

A deep appreciation for cocktail creation! Thanks to the likes of Jeff “Beachbum” Berry and Distinguished Spirits (YouTube channel), I’ve gained the confidence to become a mad scientist, so to speak, and see how I can combine different fruit juices with different simple syrups and liqueurs and how all that comes together by adding different rums into those cocktails.

I enjoy making cocktails for myself and others when I throw parties at my place. I do my best to show my guests (usually 20-30 people at a time) that rum should be a spirit they consider making part of their regular drinking experience.

That’s an extremely difficult question. Excluding my own home bar, I live in LA, and I have had the benefit of going to Tonga Hut (NoHo) and Tiki Ti’s (Los Feliz). I’ve also had the pleasure of going to Latitude 29 (New Orleans), Smuggler’s Cove (San Francisco), Three Dots, and a Dash and Sparrow (Both in Chicago). I’ll say that I’m excited to get to Caña Rum Bar in Downtown LA soon!

Another very hard question to answer as I’m constantly falling in love with certain recipes! If I had to pick the current favorite, it would have to be Planter’s Punch (improved) from Jeff Berry’s Potions of the Caribbean. I covered how to make it on my IG page if anyone wants to get a visual example!

Dissolve sugar in lime juice at the bottom of a tall glass. Add tea and rum, fill with crushed ice, and swizzle. The ice will settle after swizzling, so add more to fill. Garnish (or don’t) as you see fit”

Most Americans, when they hear the word rum, will think of either:

(A) Think of rum as some sugary spiced rum or that spirit with 8000 flavored options (the one that drives me crazy most is lime flavored rum…like, why?). Until I became obsessed with rum, I didn’t even know where to start.

(B) Those that are rum-curious don’t even know where to start when they do go to a liquor store or bar with a decent rum selection (what bottles to try, what to look out for, etc.).

(C) I’ve discovered in my conversations with many people in the Caribbean that they gravitate towards rum from their own country, and that’s it (i.e., Bajans only like Mount Gay XO, Guyanese El Dorado, etc.). Most have no appetite to try other rums, which is a shame! To me, refusing to try different styles of rum is like eating the same meal every day.

I will defer to Martin and Rebecca Cate in their book Smuggler’s Cove. They have a pretty detailed section on how to taste. What I will say is that there are no right or wrong flavors that you smell or taste as everyone’s palate is different, so don’t get caught up like I did on what you’re “supposed to be tasting”

TRL: Is the commitment to sustainable development the key of success for the permanence of the rum industry in the world? Why?

I believe that everyone should be doing their part to reduce the carbon footprint and rum distillers are no different! We live on an amazing planet, and the more we respect it, the better it will be for future generations. There are some distilleries already ahead of the curve on this; shout out to Flor de Caña (Nicaragua) and Botran (Guatemala)!

–          Jeff Berry and Martin Cate for inspiring me to become a rum-obsessed exotic cocktail lover and have a few cocktails together!

–          Joy Spence: Master Distiller at Appleton Estate because every expression of Appleton I’ve tried I love. I’ve made several rum converts of my friends by gifting them bottles of Appleton 12

–          Richard Seale: Master Distiller at Foursquare. His dedication to the zero sugar added to rums. I’d also just thank him for each of the 11 Foursquare expressions I have in my collection

–          Maggie Campbell: Head Distiller at Privateer Rum. The American Revolution was fueled by New England-style rum, and I would love to learn all about their processes and sip their rums with her.

I am on a mission to be a rum evangelist and help in any way show anyone that rum should be a go-to spirit of choice and that the best rums can compete or even surpass the finest whiskeys, gins, or tequilas.

N/A. I’m eagerly looking to get further into the rum industry! I would love to get more involved and very open to it!

A bartender has the ability to educate and entertain their clientele with facts and a delicious cocktail. The bartenders I spoke with at Trader Sam’s gushed about how amazing rum was, and that was the first domino in igniting my curiosity about rum in the first place.

Figure out ways to show the world that rum is a spirit to be respected rather than looked at as a flavored gimmick or a sugary spiced rum. Find a way to create compelling content and messaging to lure the curious in and blow them away with a craft cocktail (like a La Florida Daiquiri Number 2 or a 1944 Mai Tai).

Feel free to follow me on @therumchampion on Instagram. I am always looking to collaborate with and learn from people who are much more experienced and smarter than me. Or feel free to reach out if you just want to talk about rum! I can talk about it for hours!

Published by The Rumlab 25 days ago