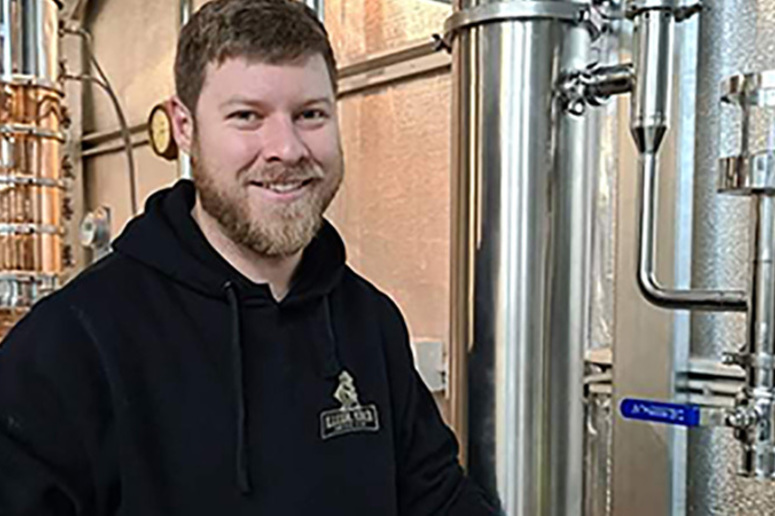 Codie Palmer hails from a small remote town in the Pilbara, northwest of Western Australia. Having been “infatuated” with distilling since he was scarcely 15 years old he – now 33, has spent more than half of his life in perfecting his craft, brewing, and distilling as many styles of Rum you can imagine.

Codie was the youngest Instrumentation electrician apprentice ever hired at Rio Tinto and once he finished his apprenticeship went on to supervise the world Class Iron Ore export ports at just the age of 20. He spent some time as an Operator/maintainer at a large power station in Perth, WA where his passion for distilling turned into an obsession. He applied the studies of Turbine and Boiler knowledge to his cramped home full of the hobby distilling essentials.

Having met his now wife Hayley, with whom he has a 5-month-old daughter, she convinced him to go after his dream of building his own rum distillery in the Midwest of WA. After a decade of experience of distilling in all types of apparatus – many of which he built himself Codie sold his house, car, and beloved worldly possessions and moved to the midwest where he, his wife, and family erected a custom-built premise to produce world-class Rum. Fast forward 6 years from 2015 and the Illegal Tender Rum Co has won 18 world spirit awards including multiple best in class accolades.

From an early age, Codie was astute with his finances, investing in real estate with what little he earned and purchasing shares at the right times after much deliberation and research. Spending over $1,000,000.00 AUD of his own money saved from almost 15 years of work he rolled the dice and invested it all.

Having survived on nothing but Mie Goreng noodles and eggs for the last few months of the build, before selling out of stock in the first 2 hours of the distilleries’ first release.

If you are passionate about Rum, you will make something that everyone believes in and loves – without cutting corners. Learn more about Codie Palmer, Co-Managing Director/Head Distiller at Illegal Tender Rum, in the next interview:

TRL: What does the rum mean for you? What made you fall in love with rum and when did it happen?

Rum for me is a feeling, the history of Rum is immense in Australia and I found myself becoming more of a storyteller of that period of our nation’s history the longer I am in the industry. I was working at a pub in Dampier called the Dampier Mermaid, where I was washing dishes for some extra pocket money at the age of 14. The head Chef at the time was a Chinese migrant worker who would increasingly spend less time in the kitchen over the course of service which led me to follow him out one fateful day where I saw him running a small distillation apparatus in his small “donga” accommodation. I would often come to work and not leave until 1, 2 am in the morning on a school night as I was eventually assisting him to brew and distil his version of Australian Rum – The obsession was born, but kept very quiet until I was at least legally able to drink!

The first Landing by the English in Australia saw a colony here without a form of currency or Tender. This is where Rum came in, it was used as currency for the first 30 years of our history where many large-scale buildings in that time were paid for, in Rum. In 1808, Rum was deemed an Illegal form of currency or Tender and that is where our distillery namesake has been born – The Illegal Tender Rum Co. This Deeming of Rum being an illicit for of tender also brought about the Great Rum Rebellion.

For me personally, the spirit itself has so many options and creative pathways to take when you are brewing or distilling multiple forms of products sought from sugar cane. And not to mention the myriad of incredible gastronomic concoctions that bartenders are able to come up with. The category is fun and vibrant and rich in worldly history – what’s not to love!

– It has an incredible history in many countries

– It is FUN, great rums can be mixed into some of the world’s most creative cocktails and be sipped neat by a roaring fire. It can hold its own to any Whisk(e)y and do it with that sense of vibrancy and joviality that can only come from this category

I initially started out not wanting to follow the “rules”. If you are going to break away from the pack and industry leaders at the beginning of your businesses life you must be different, else why would you distill simply just to fit the mold of others who have already accomplished greatness?

I have made versions of Rum in Australia from every form of the sugar cane stalk itself over the years and the one that has won our brand more accolades than any is the use of Australian Dark Brown Sugar. This is not the only ingredient, however. Over the course of multiple generations of Batch distillations, I have been continually adding to our distilleries storage of Backset and our small dunder pit which are used to offer as much flavor as possible into the final spirit.

I employ every technique available to us to create a Rum that I am extremely proud of. We use only caught Rainwater, brew with Dark Brown Sugar, and in some times Molasses. Our Spirits are all double distilled in a Hybrid pot/column still with only 4 ports allowing me to choose stages and divine out the esters created at high-temperature ferments. Everything in our process from brewing and distilling has been fine-tuned to create the most decadent version of our own Rum you will ever find in the world. I believe I have contributed to the community by versatility in ways of production and by not fitting within the mold. Every single one of our final spirit products are 100% Sugar Free.

Being incredibly isolated in WA I have not yet had much chance to travel to meet other distillers in this field. The benefits felt are a brethren unlike any other industry, we are serious about quality and fun-loving when it comes to partaking in appreciating our spirits.

TRL: What´s another thing you are passionate about, in addition to rum? Why?

Being on one of the most beautiful coastlines in the world I am an avid angler and love my motorcycles. They both offer the chance to regroup and relax from the rigors of running our own business.

At Home, or in our distillery cellar door with the very same family who have helped get us to where we are now. Rum is best indulged among family and friends.

If it is not neat it would be in an old-fashioned or a right-handed Negroni.

Many people in the world simply do not understand Rum or have unfortunately had a bad experience. There is an ever-increasing amount of types and styles of Rum and even more choice on matured stocks to choose from. Education is key – it really is an amazing category!

Neat, with a splash of water if need be. If at a higher ABV leave the glass to breathe for a time to allow the higher volatile alcohols to mellow before enjoying it at leisure.

TRL: How can rum contribute to improving the crisis in some countries?

Economics is key, it is a popular beverage here in Australia where we actively hire local workers and use local vendors and suppliers, thus stimulating the local and national economy.

TRL: Is the commitment to sustainable development the key to success for the permanence of the rum industry in the world? Why?

I believe so fervently, we do not waste any part of our products and by-products. From caught rainwater all the way to spent wash everything is reused.

Our heads/foreshots are used to sanitize our vats and equipment and we only clean with hot water/steam. The spent wash is adjusted to PH neutral and fed to livestock on our farm and sprayed on our roads on the farm in summer when the dirt roads become dusty when the wind picks up, it dries to a hard consistency and keeps the dust down from traffic. It also is great for our crops in small amounts. If we are to continue to exist and prosper we must keep as small an environmental footprint as possible.

I would love to speak to anyone who is as passionate as I am and understands the hard work that is involved in producing first-class rum.

I would like to take our experimenting to the next stage and create some single batch releases that are incredibly far-fetched – more to be announced soon.

I may never leave!

Bartenders in Australia, much like anywhere in the world are your customer’s general first point of contact. They can be the bridge between your brand and a new customer. If a bartender loves your brand and your products they will make magic happen in their bar with your products and showcase what is possible. They are imperative in the world of a distiller, sometimes a bartender has the kind of advice you never thought you needed!

Quality. Do something different and fresh.