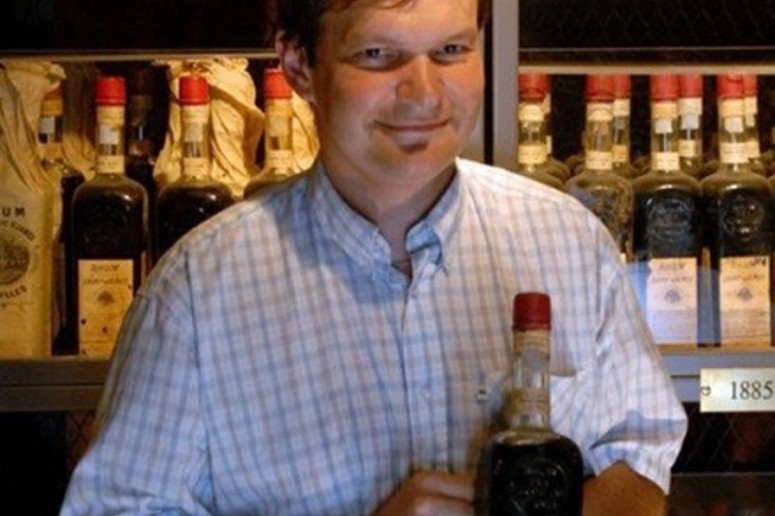 I was born in the Jura, grandson farmer, at the foot of the vineyards of Château Chalon (Château Chalon is a very famous estate in Jura – Famous for its “yellow” wine)  I had a chance to join The École Nationale Supérieure Agronomique de Montpellier, in the South of France, where there is a specialization in viticulture and oenology. I’ve always been passionate by nature and like to see the material transform, a bit like my brother’s cabinetmaker, starting from a natural  raw material and managing to create a different product, with a vision and  with the reward of consumer satisfaction.

However, during their studies, winemakers are going very fast  with the parts related to spirits. Concerning distillation, although I did not have too much to study, my maternal grandfather was already a distiller in France… It is through volunteering that I went to Martinique when the AOC was in its infancy. This has allowed me to use my lab technician diplomas for the fermentation and oenologist monitoring.

2. Three essential characteristics that define the rum according to your perspective.

Rum is a drink that brings out one’s childhood soul through the images it evokes of sailors, pirates and faraway islands, while still remaining today a festive, sharing drink with a number of variations to suit all occasions and which is the positive outcome of a sometimes unfortunate history. When we talk about rhum agricole nature is essential of course.

3. What is the most important contribution you have made in the rum industry?

I have participated in the interprofession, (President CTCS, President Tasting Commission AOC, President IGP designation French rums and President AOC Martinique) while also contributing in a more concrete way by being, for example, the main writer of the production specification of the French geographical denominations, co-author of a book for the 250 years of Saint-James… I hope to be able to modestly participate in the adventure of rum even if I am well aware that I am only a messenger for future generations.

4. Benefits that the rum industry has given you.

Work! Learning about a new world, when I was destined to be a winemaker, and about all these local and international variables, which are full of lessons. And of course meeting new people from all walks of life.

5. What is your favorite place for drinking rum?

In front of the sea, with friends, on a beach, for ti-punch in Martinique and in front of a good fireplace with a very old rhum in Metropolitan France…

I prefer pure rums. Otherwise in cocktails, with a soft spot for piña coladas… but mostly in bars where I let the bartender create what I want for the day. I love their creativity !

7.Why is it important to educate the rum consumer?

Without talking about preventing the excesses of alcohol, it is to show that the word rum is a very generic term and that it hides many variations according to the raw material, the production areas and their legislation, but it is also to preserve all the diversity of these particularities and not to smooth out the taste of rum by simply following fashion at the risk of losing our essential identity. Thus, Cachaça is Brazilian, Clairin is Haitian, Agricole is French…

8. Any tips to train the palate and taste a good premium rum?

From the 250 year old book: It is customary to use a typical glass with a narrow barrel to maximise the intensity, but with the risk of increasing the effect of the alcohol if it is used without care; failing that, use a “tulip” glass (whose shape is reminiscent of that of this flower). Alternatively, you can use classic “digestif” glasses, as long as their shape allows the flavours to come together.

Three senses, in particular, will be called upon: sight, smell and taste.

Sight: this is about clarity and colour. A good rum is not cloudy. As for its colour, it goes from colourless for white rums to shades oscillating from straw to amber for a short stay in oak casks, to more or less dark mahogany which can tend towards dark brown depending on the length of ageing. It thus goes through a whole warm nuancier.

The nose: this exercise is fundamental, and is done in two stages. First, before shaking the glass. By taking a short breath to avoid being burnt by the alcohol vapours, it is then a question of determining the aromatic intensity (ranging from weak to powerful) and then the olfactory “aggressiveness” (the offensive side of the alcohol’s burning, ranging from ” non-aggressive) Then, after shaking the glass, we proceed to the aromatic description. To do this, after vigorous shaking to extract as much alcohol as possible (do not hesitate to stir for a few precious seconds), only the aromas should be left to emerge as they are less volatile and therefore heavier than the alcohol. Then, at the last moment of stirring, you must tilt the glass and smell the top of the glass, as the aromas take the shortest route to express themselves. It is therefore at the top of the glass that the nose will capture the maximum amount of aromas. It is then necessary to detect, among the major families of aromas, those which are represented in the rum under examination. They do not all appear at the same time, of course. A poorly structured rum will present families in successive sequences, whereas a well-structured, evolved rum will present aromas by superposition, as in a great wine. As with the nose, the tasting in the mouth is divided into two stages. The first gustatory stage allows us to determine the balance of the rum: is it in harmony, between the roundness, the burning or the acidity of the alcohol and the absence of bitterness? For example, at Saint James, the white rum should be fairly round with a certain freshness provided by the alcohol to support the intensity and the invigorating side of the raw material, whereas a classic old rum should be round and warm to support the aromas.

The second step will focus on the aromatic typicity as well as its destiny in the mouth. For the typicality, it will be necessary to seek its balance with the nose in its descriptors and to characterise them in the same way. Finally, we look at the fate of the aromas, on the one hand through the aromatic persistence (to put it another way, the length in the mouth: how many caudalies, i.e. seconds before the first aroma disappears) and, on the other hand, on the end of the mouth; is it frank (it gradually fades away without being modified), or on the contrary does it present a false taste (astringency, burnt…), because the defects often appear only at the end?

In the case of vintages, it should be noted that the degrees of commercialisation are often higher (43%) than simple old rum (42% classically)- the historical ABV for vintage at Saint James was 47% , because their long time in wood has “locked up” the aromatic components throughout their evolution. Thus, by raising their degree, we give them a little more alcohol so that they express themselves better. The same is true, especially in balloon glasses warmed in the palm of the hand: after one or two minutes, very particular aromas will appear, very close to the end of the mouth.

9. Is the commitment to sustainable development the key of success for the permanence of the rum industry in the world? Why?

Sustainable commitment is everyone’s business, but everyone goes at their own pace. Thus in 2017 in Spain, I followed a presentation where Puerto Rico announced that it recycled its distillation residues… marvelling the assembly, whereas we have been doing it for more than 20 years… but we hardly communicate, we act, thus since 1970 we have had a biological fight against insect pests, the sugar cane is known to be a carbon sink, thus its current surfaces fix the equivalent of 25% of the CO2 of the car fleet of Martinique…

This is also a difference between French rums and others, we do have European standards. Now we work with organic plots and we are not using any insecticides and fungicides. We are on a small island, I believe that we have to care even more. We love our island so much!

10. Why is the role of the bartender important in the rum industry?

It is a product consumed worldwide in cocktails, with the predominance of the “American-style” bar at the end of the 19th century, developing ready-made recipes and using standard rums for standardised cocktails.

For our “rhum agricole” this was for a long time a brake on its development outside the French-speaking world, even though Saint-James was recommended in the “French bar” –  We do have a list of bars and restaurant clients of Saint James from 1886 ! Saint James was already a star in the cocktail world. at the same period and Hemingway consumed it when he was in Paris… Since then, with the emergence of Rhum in recent decades Thus, because of its unique taste, it has been worked as a new alcohol and has served as a challenge to bartenders to create new cocktails and show their know-how, which is why Saint-James created the bartender society international cocktail competition – starting in the US this year ! (more info on https://www.thebartenderssociety.org/).

11. What is your advice for new generations in the rum industry?

That a rhum remains and will remain a natural product, and that it is necessary to know how to anticipate the demand well in advance and to be patient in order to give time to time, one cannot make 15 years in 1 day… even though we have a better and better understanding of the aging process.

12. Plans you have when you leave the rum industry.

To travel and to write about…rhum !

I love to collect things… postmarks … I am also a lover of flowers, orchids in particular.